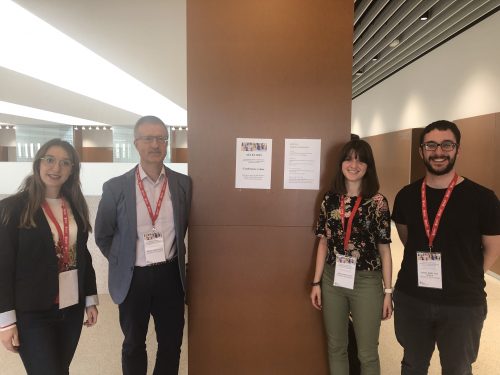 Four members of our group participated in the XVIII International AELFE Conference (20-21 June 2019, University of Navarra, Spain) with the following presentations: 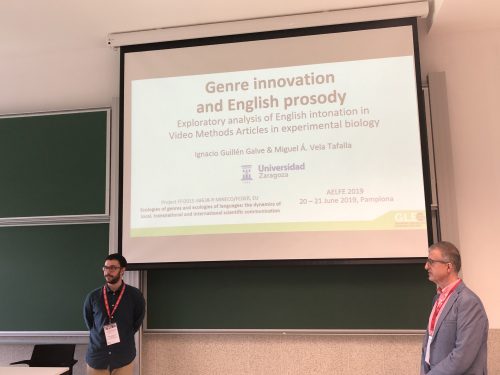 Present-day scholars face new challenges in research communication, mainly originated by new affordances in the digital multimedia environment. This can be seen in the development of new genres, such as the crowdfunding promotional video or the journal podcast, as well as in the adaptation of traditional research genres, such as the video abstract for research articles or the MOOC lecture. These new multimedia genres make speaking and visuals crucial for effective communication and successful knowledge dissemination. In this context, some studies have investigated the shape which these genres take as digital multimodal semiotic tools, sometimes including tangential considerations of features relating to prosody (e.g. tempo, tone or pitch range). However, to the best of our knowledge, no study has tackled intonation as a system in relation to genre.

We hypothesize that the English intonation system is used rhetorically in the same way as syntax or other linguistic systems: genre restricts or allows for the available choices according to the purpose of the speaker and the intended audience. To check this hypothesis before committing to a larger-scale investigation, this exploratory study analyses the intonation used in a small ad-hoc corpus of texts. Specifically, we draw from Hafner’s (2018) study of the Video Methods Article (VMA) in the Journal of Visualized Experiments and utilize the genre moves and steps that the study presents.

By looking at how the three traditional systems of English intonation, namely tonality, tonicity, and tone, relate to generic structure and other generic features, we have two connected objectives: shed light about the way how intonation is being used in research communication; and inform a subsequent analysis with a larger corpus to elucidate whether canonical prescriptive handbooks of English intonation still hold useful for the present-day researcher responding to the pressures of an internationalized and digitalized academic community. 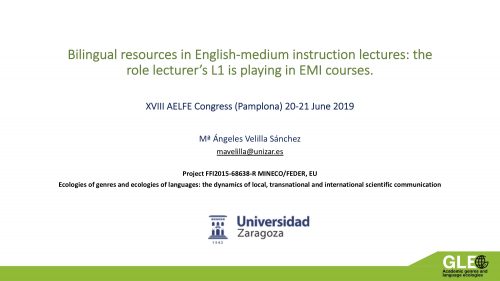 English is increasingly used as the medium of instruction and scientific dissemination in Spanish higher education institutions, being this language adopted as the common language of choice or the lingua franca (ELF) for academic activities. However, the notion of ELF is now being redefined including in its conceptualization a multilingual nature of communication by which “for ELF users, English is only one language among others present or latent in any interaction” (Jenkins 2015: 58). In this paper, I present the preliminary results of a research that aims to contribute to providing empirical data for ELF studies in Spanish academic contexts. Particularly, the study is focused on academic spoken language at the University of Zaragoza. The main aim of my research is to find out which are the pragmatic strategies most frequently used by higher education lecturers to achieve comprehensibility in EMI courses. The corpus for the study consists in 14 hours of audio-recorded lectures in two different disciplines (Business Administration and Nanoscience) that have been analyzed from a discourse-pragmatic approach, involving both qualitative and quantitative methods. The analysis of the data reveals that lecturers use their multilingual resources, particularly their own first language, as an additional tool that they have at their disposal, i.e. as a pragmatic strategy, that enables them to achieve various conversational goals, such as pre-empting potential communicative breakdowns and clarifying meaning.