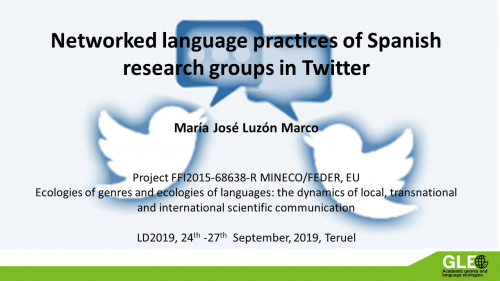 Twitter has become popular among scholars as a tool for self-promotion, information sharing and networking. Individual scholars as well as research groups use Twitter to advertise their research and publications, spread information and establish and maintain relationships. Multilingual scholars, in particular, use their Twitter accounts to reach diverse local and global audiences (peer researchers, students, interested publics). Therefore, when writing a tweet they need to choose between English (the lingua franca of academia), their first language and other languages in their linguistic repertoire. Writing a tweet also involves selecting and combining various semiotic resources (e.g. linguistic forms, video, images, audio) afforded by the social networking site to achieve the communicative purpose of the tweet. Literacy practices in academia are changing, since digital technologies make it easier for scholars to construct more persuasive and engaging texts by mixing and matching multiple modes. Thus, it is necessary to approach the analysis of academic Twitter from a multimodal perspective, and explore how scholars make meaning through the selection and configuration of modes in this particular context of communication.

The aim of this research is to analyze the networked language practices of research groups affiliated to Spanish institutions when using Twitter. I analyze how these groups employ their linguistic repertoires and engage in multimodal digitally mediated practices to connect with diverse audiences and negotiate their relations with these audiences. More specifically, in this study I address the following questions: (i) what are the purposes for which research groups use Twitter? (ii) what are the language choices of  Spanish research groups in their Twitter accounts?; (iii) how are different semiotic resources combined and entextualized to connect with different audiences and achieve the groups’ purposes?

What power relations stimulate the commute between languages in higher education? A small-scale interview study 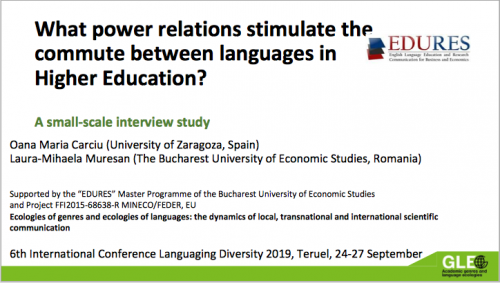 The question which drives this paper is the power of one language, English, to affect economic distribution, cultural recognition/domination and political participation. It is well established that the interaction between English and the environment of European higher education institutions has resulted in language domination and language subordination processes. More specifically, the power of English within academia globally poses an interesting conundrum for the linguistic ecosystem of European languages. On the one hand, English is seen as competing for power at the expense of the national language or other academic languages, and considered to result in language loss and anti-multilingualism by some researchers (see Coulmas, 2007; Pennycook, 2008 on English monolingualism). However, on the other hand, the prevalence of English in research, teaching and learning is well-recognised and a politically established target to promote internationalization in higher education. These two contradictory discourses portray English as inherently good, but socially problematic as a result of its power to affect the allocation of financial resources, the recognition/domination of an academic culture and the involvement at the political level of individuals in global communities (Piller, 2016).

The aim of this paper is to contribute to knowledge about how languages and their communicative resources are functionally organised in the linguistic ecosystem of academia. To achieve this aim, a small-case interview-based study was conducted. A “convenience” sample of ten academics at an European higher education institution immersed in implementing an English-only policy in research, teaching, and learning were interviewed in one-to-one semi-structured interviews in which they were encouraged to talk about the use of English and other languages within their specific disciplinary context, that is, Economics and Business. Using the framework of appraisal (Martin & White, 2005), these interviews were analyzed to identify attitudinal meanings (i.e. affect, judgement and appreciation) towards an English-only or a multilingual orientation across national and international academic settings. In addition, we were interested in what stimulates the commute between languages or what is involved in language choice in European academia, what specific tasks, needs and objectives can be defined.

It is hypothesized that multilingual repertoires are salient in the organisation of academia given the transitions that shape membership in a community of practice and academic trajectory (cf. Blommaert & Bachus, 2013). This, in turn, has implications for the ecology of languages in the European higher education area and may contribute to understanding in an increasingly globalised world, what power relations influence the use/choice of language across social contexts and diverse interlocutors and shape academics’ linguistic, cultural and social itineraries.